The history of the Canal

The History of the Canal

One of the most important projects of modern Greece, which played a catalytic role for the Mediterranean trade, the canal of the Isthmus of Corinth, has constituted an inspiration for centuries and was completed … 25 centuries after the conception of its idea.

The “Afneios Corinth” since the ancient times was one of the most important cities of the then known world, but also of modern Greece. Its geographical position has highlighted it to a great Navy, Commerce and Cultural Centre. The time clock turns back to the late 7th century B.C., and specifically in 602 B.C. At that time, the tyrant of Corinth Periander decided to connect the Gulf of Corinth with the Saronic Gulf. His purpose was to try and open a canal in the isthmus of Corinth which would allow the avoidance of a dangerous circumnavigation of the Peloponnese and to shorten the route.

The plans of Periander, one of the seven sages of antiquity, as ancient writers testify, remained unaccomplished. The technicians of the time prevented him because they observed a level difference on both sides which would cause the flow of the Corinthian into the Saronic with unknown consequences and maybe the cause of floods to the coasts of Attica.

But the reality was different. According to testimonies Periander gave up his plans when he heard the oracle and her prophecies. “Don’t fortify the isthmus nor dig it. Because Jupiter made an island wherever he thought was right “said the Oracles prophecy. That phrase and the reactions of some churchy people of the time, but also the fear that it would cause the wrath of the gods, averted him to proceed to a major project of that time. The beginning certainly had already occurred. The hard rocks justified the reputation for the wrath of the God Poseidon, but the mainly problem was the enormous technical difficulties.

But historians note that the prophecies were caused by the priests of the time and by the Corinthian people. The reason for the first ones was that they feared that by opening the Isthmus they would loose rich oblations – trader’s gifts and for the second ones the reason was that the city would lose financial resources, and the traders would just pass by without staying in Corinth any longer.

After that event Periander tried to resolve the problem by building the famous Diolkos. This was a special road paved with slabs of limestone, dressed with woods, from which ships greased with fat were coming through from the Lechaeon port in the Saronic, to the Kenchreai port in Corinth. Ships were loaded on special vehicles and were crawled through the dry land through Diolkos who was five metres wide, while the goods were transported by pack animals. This idea was very successful because the ships of the era were of small dimension and the strength of the slaves and of the animals was sufficient for that purpose. But the problem was that the cost for the tolls was very high and usually warships passed by Diolkos.

Part of this paved road, much of which is revealed during the excavations can be seen today in the west of the modern canal. The deep ruts on which the vehicle carrying ships was moving is reserved.

Perianders vision found a follower, after nearly three centuries. Demetrius Poliorcetes in 307 B.C. decided to put back in place the plan for the opening of the canal. However his initial enthusiasm couldn’t continue as the engineers he brought from Egypt had persuaded him to abandon the project. The engineers assured him that the waters of the Corinthian that would have been poured into the Saronic would have drowned it, in consequence the drowning of Aegina island and its neighbouring islands.

The hegemony of Rome gives a “fresh air” to the project, after about two and a half centuries. It started by Julius Caesar in 44 A.C. who failed, just like Caligula did, in 37 A.C., and also the other emperors Hadrian and Gaius. But the plans were abandoned for military and political reasons. Indeed in 40 A.C., Gaius, delegated to the technicians the study of the project.

The most important step however occurred when Nero got the rein of the Roman Emperor about 66 A.C., at the age of 29 when he was at the Isthmian games. There he decided, as Lucian mentions, to proceed with the project and he announced it to the Greeks. A few months later in 67 A.C., he makes the opening of the projects on November 28 at an impressive ceremony, where he used gold mattock under music trumpets.
Nero worked with enthusiasm very intensely for the project, on which thousands of workers worked for, slaves and convicts who worked very hard. Indeed only from Judea 6,000 Jewish prisoners were sent.  However the turbulence in Rome forced Nero to return and to face General Galva’s rebellion. Projects stopped abruptly because of the rebellion and definitively after Nero’s assassination, despite the fact that the projects were carrying on with an amazing progress. Herode Atticus and the Byzantines followed him after, but again without any result…

The traces of the opening project of 3,300 metres length were maintained until recently. After centuries and the final opening of the canal, 26 wells on a trial period with 10 metres depth each and several ditches of the Nero era were found, that showed how many important steps were made.

In 1687 the Venetians tried again to finish the project, but without any results, as there were insurmountable difficulties. The Venetians even tried to open up the Isthmus, starting the excavations from the Corinthian gulf this time. However the major difficulties that they encountered had led almost instantly to the projects interruption. 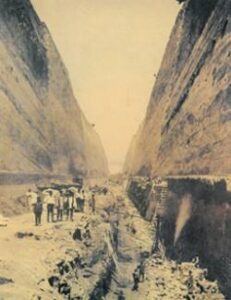 In 1830 the first governor of Greece Ioannis Kapodistrias decided to carry on with the ambitious project. The plan of opening the Isthmus came to the fore again. Ioannis Kapodistrias entrusted the project to the French engineer Virle d’ Uct, who had estimated that approximately 40 million gold francs would be needed in order for the project to be completed. This amount was too big for the young Greek nation.

But it was too late. In 1869 the Suez Canal functioned and that process roused the Greek government to decide the intensification of their efforts. The same year the Zaimis Government decided and voted the law “on the Isthmus canalization” and essentially favourable decisions were taken for the establishment of companies in order to undertake the project.

Under this arrangement the government was entitled to give up the privilege of construction and exploitation of the Corinth Canal to a company or an individual. For this purpose they signed in 1870 a contract with French entrepreneurs. That Contract, however, weakened and in1882 the establishment of the “International Society of Marine Corinth Canal” became possible by the Hungarian General Istvan Turr, to whom the Greek government a year earlier had awarded the project with the privilege of its exploitation for 99 years.

The company was formed with the assistance of the French bank and its corporative fund which were consisted of 60,000 shares of 500 francs each. France with the canalization of the Isthmus of Corinth compounded with the largest speculative phase of the 19th century in Europe. The French constructional companies which were involved in the project have developed into powerful economic organizations and the projects began, based on Nero’s plans.

The commencement of the project was on April 23, 1882, in the presence of King George I and many guests of honour. It was one of the most important public projects that were conduced in the late 19th century and were linked to the face of the modernize Prime Minister Harilaos Trikoupis.

The study of the project was made by the Hungarian Bella Gerster, Chief Engineer of the Canal Francis in Hungary. For the materialization of it, architects and engineers from across Europe collaborated and original explosive equipment were used, dynamite and other explosive materials from the Nobel family factories both in Italy and Germany. However the project stopped again after approximately 8 years because of Tyrr’s bankruptcy and lack of money.
In 1890 the effort continued from the Greek contracting company and with the participation of benefactor Andreas Suggros. Eventually the canal was opened in 1893 after 11 years of works. On 25.7.1893 in the presence of the Kings and the Government, officiated by the eparch of Corinth the opening of the Corinth Canal was made. The opening of the Isthmus, one of the greatest achievements of the construction period, shortened the sea route from Piraeus to Italy by half.

This site is registered on wpml.org as a development site.